This was a special mani for me, because it was for my son's 1st birthday party :)

We had a farm themed party and I knew I wouldn't have time for animal nail art, so when I found this john deere themed polish on Glitzology's site I knew I had to have it!  They were having a 50% off sale so I got this polish and a Cupcake scented cuticle oil (it smells like heaven).

I used the 3 Minute Artificials as my base, then 2 coats Barielle Lily of the Valley, 2 coats Ulta Sun-Sational for accent nails, then ONE coat Country Girl, followed by 2 coats of Gelous topcoat. 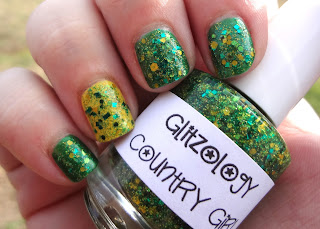 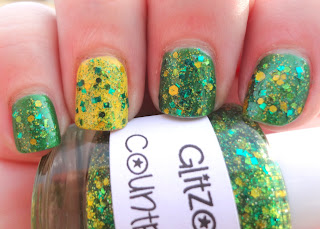 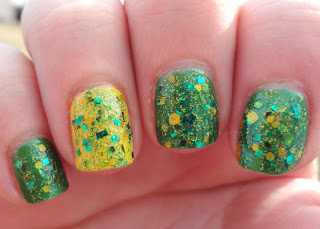 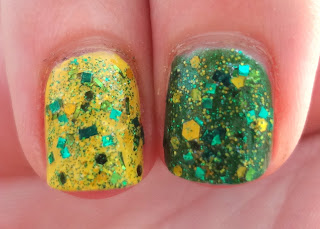 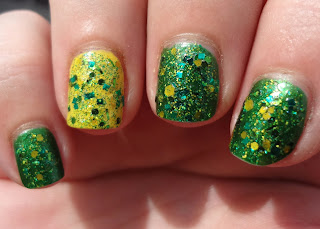 One of the problems I had was that It's incredibly thick.  I love a good glitterbomb and expect some formula issues with them but this was nearly impossible to apply and I will have to thin it to use it again.  This is one coat, as thin as I could get it.  It was so chunky that the brush wouldn't even spread, requiring quite a bit of strokes to get a full coat.  Because of that, I had some glitters that wouldn't lay flat, and the whole thing was very rough and required 2 coats Gelous to get it to just not scratch me.  It was no where near glassy smooth but I can imagine it would need at least 1-2 additional coats (for a total of 3-4) to achieve that, similar to a liquid sand polish.
**I am attributing the thickness to the fact that Stacy said I received a practice bottle, and hoping the next bottle is better**

i was hoping to have things resolved in a professional manner and not have to include this next part but i want to be honest about my experiences...

When I first ordered my polish from Glitzology, I sent Stacy a message asking when she estimated they would arrive as I was hoping to wear it for my son's birthday party, well it got here on time and I was thrilled, until I was up ALL night the night before the party trying to paint my nails because it was taking so long to dry.  I emailed Stacy 2/4 and let her know the polish I received was not a yellow jelly base like advertised, but a clear base. I decided not to mention the consistency and just decided to thin it.  She apologized and said I must have gotten a practice batch bottle by mistake, she said she would send out a new one right away and allowed me to choose an additional polish for my troubles, I picked crunch berries. I even told her how impressed I was with her customer service.

After not receiving a tracking number I sent her a message on 2/13 to make sure there was one. She informed me on 2/15 she had been busy and would ship the polishes the following Monday 2/19 along with a few extra goodies because of the wait.  She sent me a tracking number when she sent the last message on 2/15 but it doesn't work.  I sent her another message on 2/21 and again on 3/1 asking her to double check the number for errors and heard nothing back.
I finally received my package on 3/9, and when I checked the tracking number on the package (not the one she gave me) it shows it was mailed 3/6. I received Country Girl, Crunch Berries, Mali-Blu Stacy (not in her store, this is the one she said she may be releasing but wanted input on), & Hell on High Heels.  I have swatched them all on nail wheels and unfortunately Country Girl is still not what is shown on her etsy.  This one has more yellow glitter but it is still not a yellow jelly base but a clear base, I still like the color mix but it bugs me that it's not what is listed on her etsy. The other polishes are great though.  Here is a comparison of the first bottle of Country Girl, that Stacy said was from a "practice batch" on the left.  On the right is the replacement bottle she sent that should be correct. Both are one thick coat. 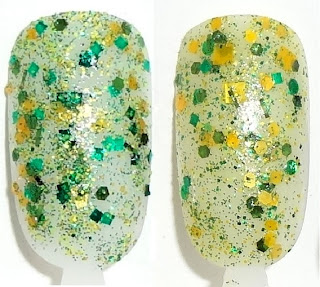 And below is the swatch picture from her etsy listing (with the yellow jelly base)
(1, 2, & 3 coats L-R below) 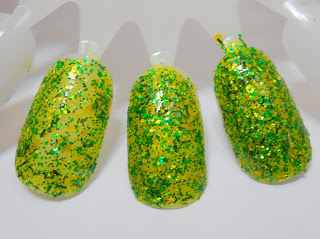 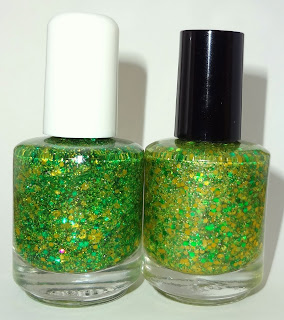 As you can see, it definitely has more yellow glitters in it, but it's a long shot from the bright yellow base advertised.

UPDATE:
5/28- I was given a bottle of Glitzology Country Girl from a lady who received it in a swap and didn't like it, I swatched it and this one is much closer to the pictures from Stacy's page!

Here are the other 3 colors I received, Hell on High Heels, Mali-Blue Stacy & Crunch Berries 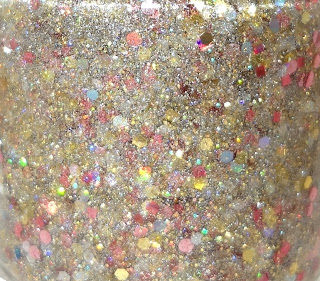 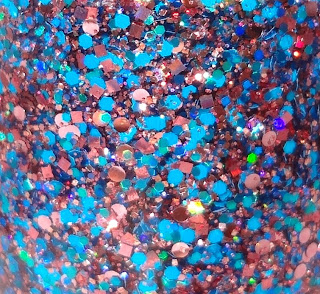 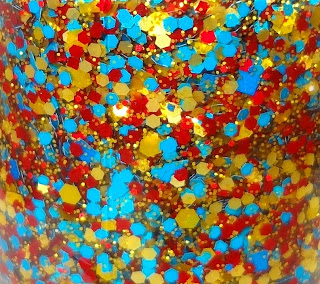 Stacy finally responded to the inquiries about her absence on facebook (multiple people were asking about their orders) on 3/9 by saying this:

"Hi everyone! I want to apologize for my absence. So far 2013 has pretty much been the crappiest year ever, and it's only March! As I previously mentioned, my long time boyfriend and I broke up unexpectedly. Shortly after that, I got the worst case of the flu I've ever had. Just when I was recovering, I injured my back again (I have three bulging discs from a gymnastics injury in high school). I've been getting steroid shots in my spine and going to physical therapy. Basically doing all I can to avoid having to have surgery. I've been pretty much stuck on bed rest for almost two weeks and I'm going crazy! But this time I am trying to follow doctors orders and not push myself so hard. I am working diligently to get caught up on orders and after that I am going to take a much needed break and put my shop on vacation for a few weeks to focus on my health. But once I get the doctor's ok, I will be back full force, so don't think I'm going anywhere! I'm gonna post this to my shop page also so everyone is up to date. Again, I am sorry about the delay and I appreciate everyone's patience. Thanks ladies!"


I completely understand and sympathize with her health and personal issues, but I don't see why she couldn't respond to my messages while on bedrest. I would have been happy with any update rather than none.  I love Stacy's color combinations, and had some in mind to order but right now I can't see myself ordering from her again and not knowing if or when I will see the product.  I would love to try ordering from her again once her shop is back up and running for a while.

*** Y'all please take a minute to also check out my jewelry page, the tab is at the top of the page, Contact me if you'd like to purchase one, and Thanks for looking :)
Posted by Jena Lei at 9:30 PM

Let me know what you think!